If take a look northward of Bagrati Cathedral the sight will captured by white outlines of sunk in green structures of Gelati Monastery, located in a distance of some 12 km from Kutaisi, on a flattened area of a high hill in Imereti.  Gelati monastery, found in 1106 by King David IV the Builder initially was thought to be under the direct subordination of the King himself, not of the Bishop.  At the same time a higher education institution – Gelati Academy was founded there.  In parallel to this, construction of the main church of the monastery in honor of the Birth of Mother of God was commenced, where the miracle-working Khakhuli plique-a-jour icon of the Virgin was rested as the main sacred object (the icon itself was written in X c., but after its solemn arrival to Gelati the internal surface of its doors were newly embossed and adorned with lots of precious stones and plique-a-jour).  The temple crowned with a dome has got the “recorded cross” configuration with two columns, the design quite common for the temples of those times.  The narthex attached from the west is the only deviation from that wide spread layout.  But on the other hand unnatural width of the dome barrel, thickness of columns and highest level of illumination has created absolutely unique space, which differs from all other internal spaces – very extended and lengthy, free and unburdened, with its huge surfaces as it enveloping a huge cosmic space.  Quite interestingly the exterior surfaces also differ from the common tradition – they are almost free of fretwork decoration, although the impressive and voluminous arcades on the arms, coupled with window frames with rather complex profiles gain considerable degree of sculptural features to those fretwork.  The temple was completed in the life of King David, hence before 1125 – the year of his death.  Wall painting was performed in the reign of his son and hair Demetre I.  Only the mosaic of the sanctuary conch (The Virgin with child and archangels in front of them) and frescoes in the narthex reflecting the Ecumenical Councils are of the original times.  Several chapels were attached to the temple through XII-XIII centuries.  One of these chapels built in the closure of XIII century, in the reign of King David Narini is adorned with contemporaneous wall painting that contains the king’s portrait.  Wall painting of the main church with portraits of King David the Builder and of other historical persons as well as frescoes of other chapels is even of later times.  Most of them were performed in XVI-XVII cc.  Gelati monastery was one of the richest establishments of its kind with lots of icons and crosses, manuscripts, different things useable in liturgy and other services and numerous memorabilia.  Part of this collection has been lost at earlier times, while its considerable portion was gone during the XIX c, so that currently only the remains of this once huge monastic deposits are exhibited in Kutaisi and Tbilisi museums.

There are several other interesting and important monuments in the surroundings of Gelati monastery that are worth to be mentioned.  Some of them are contemporaneous to it (for instance, so called Sokhasteri, now turned in ruins), while some are of the later times (St. Sabah single-nave church now in verybad repair, or St. Elijah the Prophet church with XVI c wall painting performed in typical “folk” stile). Gelati monastery closed after the establishment of the Soviet  regime was restored in early 1990-ies and since then services are being provided uninterruptedly.  Several monks have appeared here as well. 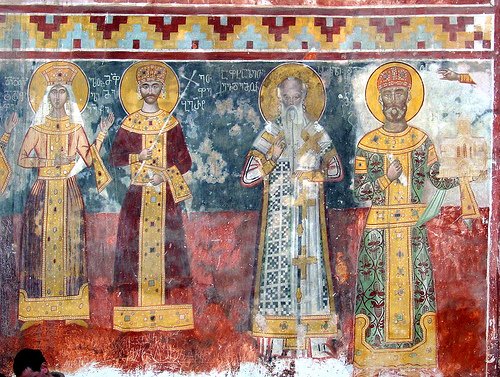 Other churches of Gelati monastery where built in XIII c.  A small St. George church with the recorded cross configuration and one pair of columns is one of them.  Some fragments of contemporaneous frescoes are preserved in the porch, while most of its space is adorned with XVI c wall painting.  Another minor church is devoted   to St. Nicolas is a two-storied building;   one more structure of the monastery is a bell-tower with a spring pouring from its basement.  Architectural patterns and even the construction material (hewn  white stone) of all of the aforementioned constructions just duplicate the tradition of the main church.  The building of the Academy is preserved as well.  Only its roof had been missing until its recent successful reconstruction.  This building is basically made of rubble stone, only its XIII c porch adorned with fretwork and risings is built of nearly hewn stone.  The old gate of the monastery where King David the Builder was buried according to his will is still preserved.  All descendent of King David has found their last shelter in Gelati monastery as had the Kings of Imeretian Kingdome since the beginning of XVI c.   They did all their best Gelati episcopate to be founded and as a result, in the second half of XVI c Gelati became the permanent residence of the Patriarch – head of the West Georgian church.