On 28 July in Svaneti is may be the most important local festival – Kvirikoba, also known as Lagurka. Every year before down on 28 July all people from Svaneti gathers at st. Kvirike and Ivlita’s church. There traditional sacrificions and competitions take place. Also is prepared special sacral brad – lemzir.

If one wants to attend Kvirikoba festival, please contact me.

Kvirikoba, also known as Lagurka is celebrated in Svaneti from very ancient times every year on 28 July. This year I had chance to be in Svaneti on that day. Celebration takes place in village Kala, at church of st. Kvirike and Ivlita, which was built in XI century and painted by king David IV the builder’s private painter. church is located on uphill and only way to get there is trail. First of all, please gathers at church at night time to pray. In the morning liturgy starts, and all village buys bull and scarifies it. Bull meat is boiled in ancient copper pot, which was used in Svaneti from early meddle ages. After liturgy ends, olders of village take out from church icon of st. George and pray in Svanish, blessing families, who sacrifices money for the church. In the church yard young men start competition, they try to take and throw huge stone. This year nobody could throw it behind. After finishing this part of celebration, people just make parties at nice places. Many food, wine, vodka and songs. 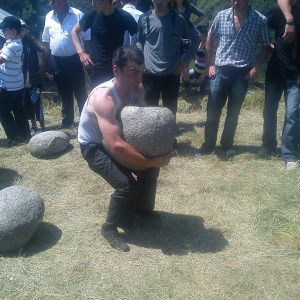