Ruins of Kumurdo  Cathedral stand on the background of ill-favored and barren landscape of Javakheti  plateau, in a distance of 12 km from Akhalkalaki, Samtskhe-Javakheti region.  The extensive inscription curved on the stone slab that fortunately preserved up to now tells that the threshold of the cathedral was placed in May, 964 AD.  According to that inscription the Bishop of Kumurdo  John has initiated church construction.   Name of an architect was Sacotsari.  After reconsideration of the six-apse design five-apse configuration of the church was obtained, instead of being situated radial.  Western rectangular arm of the church is three-nave, with internal narthex and three sided gallery arranged in its western end.  External  layout of the church is cross-shaped;  in response to three-partite sanctuary two triangular niches are arranged on western façade, coupled with two others, one at each lateral façade.  A porch-chapel is erected in front of the main entrance  —  the eastern one, with a tiny shrine arranged in the thickness of the load-bearing wall.  Despite of the relative simplification of the design  Sakotsari  has managed to preserve all integral elements of the six-apse construction and provide sufficient dynamics through trapezoidal bemas running along the lateral apses and  column-like protrusions that support sub-dome sagittal arches.  All the aforementioned provides general elevation of the internal space and creates  strong impression of motion and charge of life.

All elements of decoration – window headers  and  framings  adorned with light, open-work-type fretwork, a complex, large frame of the sanctuary window, cornices decorated with different images are scattered over the vast surfaces of the building exterior, faced with most accurately hewn stones.  Adornment is so perfect, clear and clean that they may be perceived as the embroidery instructed on the metal surfaces.    Several risings still well noticeable on eastern sub-dome tromps include images of the church construction donors – Queen  Gurandukht,  her brother  King Leon of Abkhazs  and her spouse – King Gurgen of Georgians.  All of those images coupled with those incorporated in the sanctuary window decoration are plain and tabular, while the heads or possibly the faces of archangels placed in the niches and over the southern porch, on the contrary, are rounded and volumetric.   Motion is sensible even in symmetrical elements – inscription over the western façade is slanted northwards, interlocked tromp-like spaces are arranged on the corners of the church arm exteriors.

Even today, with missing dome and western arm the monument is perhaps as gorgeous and splendid as it was upon the completion of its construction.  The temple has got several sections that were added to its body at later times the most important of which is southern porch constructed along the western arm.  This attachment of the first of XI c was initiated by Queen Marry of Georgia.

All preserved fragments of wall painting, for instance within the sanctuary are relatively younger then the building itself.  It seems,  frescoes of the north-western apse were performed sometime in XIII c. Western porch of the cathedral bears footprints of XVI c refurbishment.  Two X c steles are erected close to the temple. 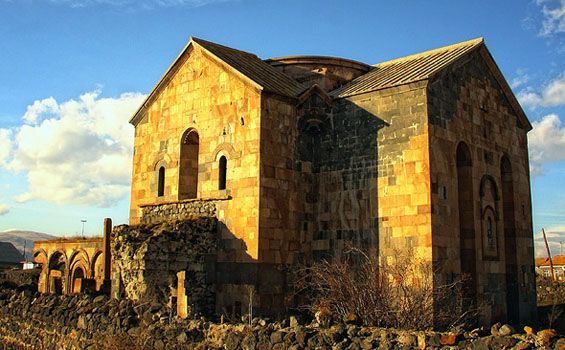