Akaverdi Cathedral is located in Kakheti, on the left bank of Alazani River, in a distance of 18 km from the city of Telavi. With its upright outlines it is easily noticeable on the marvelous background of Alazany valley, encircled by gorgeous mountains of Tusheti. The monument was built in the first quarter of XI c, in times of so called Great Cathedrals, during the rapid risie and development of the country. This temple has been erected instead of the early one, built in VI century by St. Joseph Alaverdeli , one of the thirteen Assyrian Fathers. According to some assumptions this place, then covered with virgin forests, apparently had been the point of worship of the pagans and the Church deliberately choose it for the purposes of facilitation of conversion of the locals already used to worshiping here, into the new faith.

Constructions that make the entire Alaverdi ensemble are of various periods and destination. They are as follows: a chamber, palace of Peikhar-Khan, refectory, military barracks, a vine caller, a bathhouse outside the defensive wall and others. The cathedral has got tri-conch configuration, what means that it is a cross-shaped structure. Three arms of the cross are ended by semi-circular apses and the forth one is slightly elongated and rectangular in shape with a gallery arranged therein. All three apses do not exceed the area of rectangle of the external walls. Well illuminated through wide doors and windows, with strongly elevated interior the church is almost literally reaches the heavens and is one of the most majestic temples in Georgia. Tree gallery-like porches were attached to the main body of the construction from the west, south and north. Two of them – northern and southern once were destroyed in XIX c. At the same time, after annexation of Georgia by Russia both interior and exterior of the church were plastered and whitewashed, a huge iconostases was erected in the sanctuary dividing it from rest of the internal space (currently the iconostases is removed).

Decoration of facades is relatively restrained that is common for Kakhetian region. Wide surfaces is huge walls are basically adorned with arches and niches within the eastern wall. Some rare fretwork only underline splendor of the construction.

The temple has been restored for several times. All sub-dome vaults and the dome barrel made of brick were re-built in the last quarter of XV c during the reign of King Alexander and Queen Ann. No doubt the reconstructed dome has most closely replicated the shape of the original one. Another grand reconstruction initiated by Queen Tamar, mother of King Erekle II, carried out in XVIII c was aimed at remediation of affects of strong earthquake.

While cleaning the interior in 1966, several layers of wall painting were revealed. The earliest is contemporaneous of the temple itself and is dated back to XI c. Later samples were apparently performed in XV-XVII cc. Plaster and whitewash were removed from the exterior in 80-ies of the last century.

The bishop’s residence-palace is the most significant of all other constructions of the ensemble. From south it is attached to the defense wall. Its ground floor is the most interesting part of this repeatedly reconstructed building, because of XVI c refectory preserved almost untouched, with the arches adorned by decorative patterns borrowed from Islamic architecture. 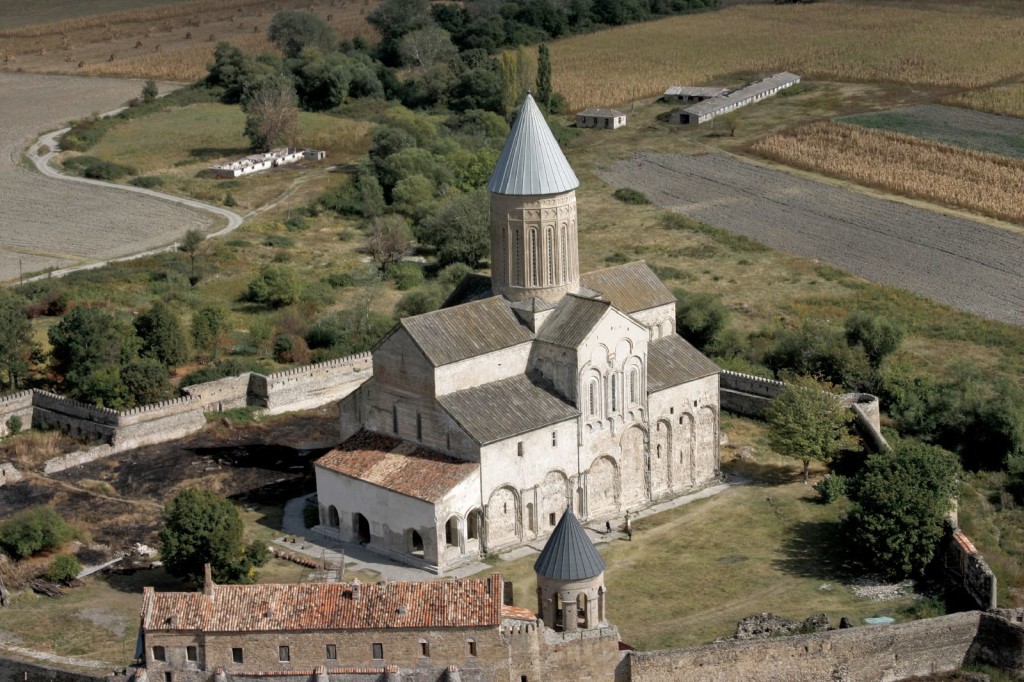